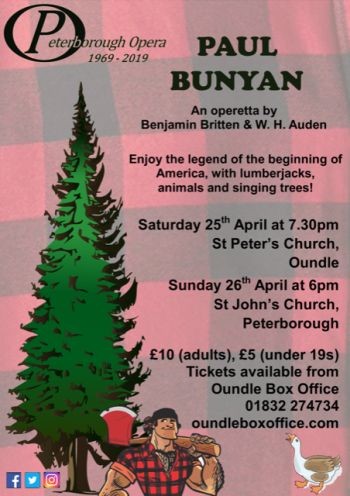 Paul Bunyan is the giant at the centre of an old American legend who is believed to have been the first logger. The operetta, which was written in America for students at Columbia University, received its first performance in 1941.  It didn’t have its UK premier until 1974 - at Snape Maltings with Britten present.

Paul Bunyan is huge and usually accompanied by a blue cow called Babe. In the operetta he recruits lumberjacks from all over the place, sets up a camp and tries to find a bookkeeper. The cooks want pets, so there are a dog and two cats, and at the start of the work, the scene is set by a forest of singing trees. News of Paul Bunyan is brought by three geese, and the action is triggered by a blue moon.

There is love (Hot Biscuit Slim and Paul’s daughter. Tiny), a fight, a row about the food and a Christmas party.  In Peterborough Opera’s production, everyone who wants one gets a solo to sing and we all have lots of fun.