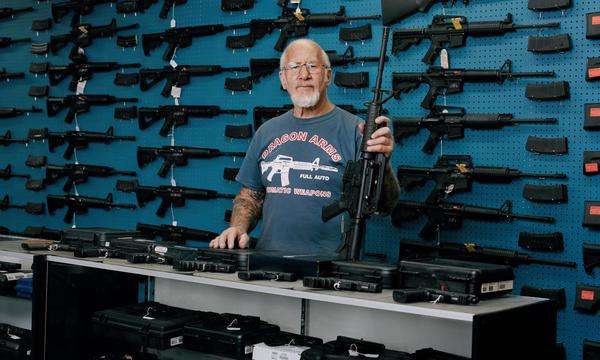 AN EVENING OF GUARDIAN DOCUMENTARY SHORTS

These are very much standalone short, contemporary films designed to remain relevant in a year’s time or more, and so not necessarily tied to a current news story.

This evening, we are screening three films:

•        'Gun Nation’. In the 18 years since Zed Nelson's seminal photography book ‘Gun Nation’ was published, 500,000 Americans have been killed by firearms in the USA. Half a million people dead - and many more injured. Nelson returns to the people he met, photographs them, and asks “Why?”

•        'The Valley Rebels'. Spencer Wolff’s film is about Cédric Herrou, a French olive farmer and immigration activist. He became known in France and internationally following his arrests for helping more than 250 migrants cross into France from Italy. Herrou's efforts have been described in the media as the "French Underground railroad". After numerous convictions for assisting migrants to cross the border, Herrou's actions were found to be legal by the French Constitutional Council, which found Herrou's actions to be covered under the constitutional exercise of fraternity to others.

•        'Fighting Shame'. This film, by Sally Ogden, follows women in Leeds who have launched community initiatives to combat the stigma that surrounds poverty. They tell their stories through eight everyday objects which demonstrate daily struggles, and want their voices to be heard by the UK’s policymakers. It is the first documentary commissioned as part of a collaboration with the Joseph Rowntree Foundation, which is supporting the Guardian’s documentary films that seek to reframe the issue of poverty in the UK and engage a wide, mainstream audience.